I heard on the radio this morning Lance Armstrong is preparing to come clean (kinda).

I must confess, I’ve never cared for the public image the cycler portrayed. He seemed cocky, seemed like a womanizer, and even seemed to over-state his battle with cancer for publicity purposes. I remember the interview after one post cancer Tour De France victory where the reporter asked if Armstrong thought his rousing success was a miracle of God.

Armstrong’s (paraphrased) response: “This wasn’t God, this was me.” 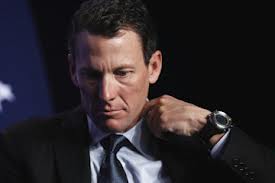 After lying about doping for years and hiding behind his foundation under the guise of righteousness, a revealing light has come out against Armstrong in the testimony of a great cloud of witnesses. In the past ten years some of these hapless victims Armstrong has taken to court, publicly slandered, privately bullied, and viciously squeezed every last penny out of their reputation in humiliating fashion.

Their crime: Telling the truth about Armstrong’s cycling legacy.

What a dirtbag! was the first bitter thought on my ride into work.

But as I brooded over the injustices I heard, a chord struck me at the soul level:

Lance Armstrong is a broken soul that needs grace at least as much as I do.

He is in the same perilous boat we are all by nature in:

Dead in our trespasses (Ephesians 2:1).

Natural rebels against a high and Holy King.

Armstrong may not see it that way, but God forbid I withhold grace from a soul who clearly needs it. Because in the end, I likewise am a soul who clearly needs it. If true, Armstrong’s wrongs against humanity are real and demand repentance. But they are no worse than my daily crimes of neglect and brattiness against a Father who has called me His child through the blood of His dear Son.

The main difference between Lance Armstrong and Bryan Daniels? If I have experienced this dynamic grace in the person of Jesus like I claim to, I should know better.

So this morning, by the grace of God, my pretentious self-righteous anger turned into mercy filled intercessory prayer for Armstrong.

I pray his lasting mark on earth won’t be a yellow Livestrong bracelet, but the bloody red embrace of strong love found at the foot of cross and empty tomb. I pray he sees there is a far better race to run and prize to win in this life, and he will never win it without the grace of a Father being lavished on him.

And I thank God for His free impartial intervening grace to fallen undeserving men; even dirt bags like me and Lance Armstrong.