GK Chesterton once wrote, to the chagrin of those who demand a person’s political and religious views remain in the private sphere, this:

I never discuss anything except politics and religion. There is nothing else to discuss. Nothing of importance can be separated entirely from its social effect, which is politics, or from its ultimate value, which is religion.

As a tandem post to my last political piece, “Never Trump and Never Hillary (Letter To Those Stuck In Two Parties)”, I wanted to add a small political and religious addendum (which may grow).

Many well meaning conservative Christians have thrown in the political towel this election cycle. They admit the two major choices aren’t inspiring. They concede Trump has many character deficiencies as a candidate and is likely not as conservative as he lets on during his speech rallies. But all those glaring weaknesses matter little compared to this: He’s not Hillary Clinton at least (overtly pro choice progressive).

The fragile hope of these reluctant Trump supporters is that at bare minimum he seems open to the conservative view of things, and maybe, just maybe, he’ll appoint brilliant political minds around him to cover his deficiencies. Maybe even God will knock him off his high horse like Saul of Tarsus and he’ll grow to be an unlikely champion of Christian ideals (different post). Even if no personal epiphany occurs, look at Scripture they may say:

The following is why I believe we can reject such fatalism in our current political climate.

As the American electorate we’re in a unique position the ancient Israelite citizens never were. Our constitutional republic affords us certain rights, one of the greatest is our ability to vote concerning our political leaders. At the birth of the US, the power was placed in the hands of individual people, “We the people” specifically, not an over-reaching central government leader.

Israel’s political climate was much different and typical for its time. As a monarchy Israel was given a king or a judge (1 Samuel 12:13). You don’t vote in a monarch you simply submit to it. God preferred to be the only King of Israel but reluctantly conceded the Israelite people’s impatient urging and gave them over to Saul (1 Samuel 8). Saul wasn’t voted in. World history shows kings in other nations gain their position by family lineage or outright violence but the greater populace has little to do with his position of presumed power. Kings are not voted in. In contrast, Americans, and hat tip to the collective genius of our constitutional forefathers, have an active role in voting in the most principled men and women of character we have available to us. 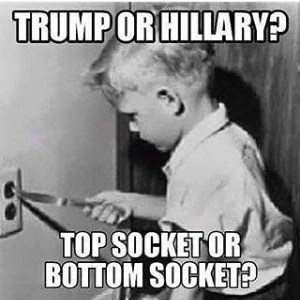 I am a strong believer in God’s sovereignty in human affairs, even the current wonky political affairs that make my stomach churn (Daniel 2:21). He can and does use whomever he pleases for his glory.

But the fact that God used an unrighteous Babylonian King for his glory 2800 years ago is no reason for his people to clamor around modern day unrighteous Babylonian authoritarians. Ancient autocratic political structures limited the involvement of the masses to mere recipients of the given King’s graces. Modern democratic political forms seek (or at least should seek) to energize and empower the masses to actively participate in the process of electing their given leaders. Electing especially those leaders who would consider authoritarian power to be anathema to the founder’s ideal.

We have a litany of choices before us. Not one. Not two. But many.

And yes, God used a Donkey to speak on his behalf once. But 1. That is not the normative way he wants to get his message across, and 2. That is not license for us to vote Donkey’s into the highest office in the land.

To the donkey’s defense, he’d probably be less of a jackass than the limited choices now before us.

And it goes both ways.

To apply ancient Israel’s governance to the modern American model will lead to hermeneutic headaches.

If God can use evil Kings and donkeys, why care whether Trump or Clinton is elected? He can use either of them right? Such a view inevitably leads to an impotent fatalistic view of personal ethics. Christians should not be forced to make choices that sear their personal conscience just because one candidate is better at pandering to them than the other. The same could be said of every evil totalitarian this side of Nero. God can use them, right? So let’s just wait and see what happens. This logic is a slippery slope that will leave everyone paralytic and tumbling down a ravine of shrugging inaction.

I still plan on voting in the general election. As far as president, I’m still not sure who that will be. The Libertarian Party and apparently David French are becoming more viable options as I write this. Who knows, maybe I’ll even write in a literal donkey as my choice on election day. 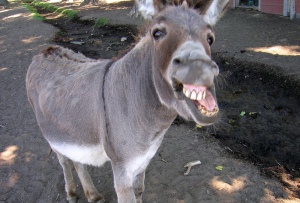 Couldn’t be much worse than what we’ve produced thus far.

I am writing this as a voter who does not shy away from the “Christian” or “conservative” political labels. Pro life and pro family are positive titles to me I’m proud to wear as a committed pro human (pro human on most days). Given those personal predilections, it is rightly assumed I would never vote for Hillary Clinton in the upcoming presidential election. I empathize with both the #neverTrump and #neverHillary social media movements. But, since I’ve always been a registered Republican voter in my voting lifetime, I feel the need to speak to the deficiencies found in my own “home team” before I speak to the away side.

This will be the first year I will not be voting for the GOP nominee in the general election.

The first objection raised with this statement from Republican adherents is inevitably, “Don’t you know not voting for Donald Trump is a vote for Hillary Clinton?!” (Or “Killary, Billary, Or Hitlery” or some other witty* alt right modification on the name)

To which my knee jerk reply is,

It’s not just that he has a nasty public persona: Yes, his whole faux tough guy veneer, his jingoistic rhetoric, his misuse and abuse of Bible texts, his 7th grade girl Twitter tirades. All those are bad enough. But what’s worse is this: we don’t even know what he really believes about the Constitution or how executive powers are limited by it. He wants to fix the nation like he can buy and fix a dying hotel property with his brand of CEO style authoritarian leadership. But the office of president wasn’t designed to work that way.

It’s apparent he’s making up important public policy and platform decisions on the fly, like a contestant on “Whose Line is it Anyway?” Except this isn’t funny anymore and the points do matter this time around. Once you get past his talking points about a wall, China, and bombing oil fields you realize his chamber is spent. And we’ve gotten to the point where his unprepared incoherence is actually endearing to many voters. Oh, he’ll figure it out later, he’s smart. He’ll fix America.

We need a statesmen who will keep the government restrained from it’s natural impulse to fix everything. As the old Reagan adage goes: The nine most terrifying words in the English language are, “I’m from the government and I’m here to help.”

The government just wants to help you like a young Kylo Ren just wants a hug from his daddy, Han.

We don’t need those types of hugs. Nor do we need in the most powerful office in the land

or a celebrity obsessed with his own exploits.

The next objection in line will be, “So what, Hillary doesn’t care about the constitution either? We KNOW that from her decades of political experience.”

And I concede that. That is why I’m not voting for her.

To which one might respond, “We only have two dominant parties, so we only really have two choices.”

This is where I’d diverge:

It is not so much about winning this election. Right now the choices between the two major parties are marginally different this election cycle. The line between Democrat and Republican has disappeared and the true line is between authoritarian and libertarian. And one thing, other than authoritarian political philosophy, the two parties also have in common: People’s disenchantment with these two presumptive candidates is historically high. The unfavorable ratings for both are astronomical. One would have to go back decades to find such  a parallel hatred for both dominant candidates on the same election year.

A third party is primed to make a serious statement. Not necessarily win. Is the magic vote number 10, 15, or 20+% in the general election to begin a movement that lasts? I don’t know. But my hope is a enough noise will be made by a principled constitutionally coherent third party, that, maybe, down the road, a three party system can develop. When a Trump/Clinton term gets done crashing and burning in a brilliant display of attempted autocracy in 4-8 years then maybe a libertarian republic can rise from those ashes.

Maybe 8, 12, or 16 years from now the two party system will be broken for good. Dream with me here. Maybe when all three of my sons reach voting age they will have more than the two viable presidential choices their daddy did in 2016. Can I get a witness? Maybe those choices won’t violate their conscience and make them physically sick to their stomachs at the prospect of voting for only the “top” two candidates.

Protesting with our collective vote and waiting for that to happen will be difficult. It may be a long shot and I know it’s not the most expedient sexy revolution that can happen. Fox News and CNN will probably not even televise it. But maybe that’s when America will be great again.

At least that’s my hope for this 2016 election, beloved.